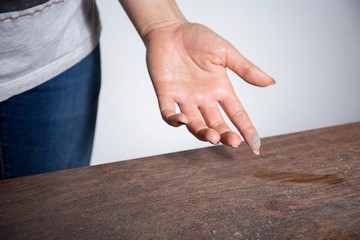 We are continuously interacting with microorganisms such as bacteria and fungi as they are ubiquitous in the environment in which we live. Household dust is generally made up of different forms of these fungi and microbes, depending on the cleanliness, gender, pets, and daily activities in the home. There has been approximately 125,000 different kinds of bacteria and 75,000 types of fungi identified in the average household (Charles, 2015). Upon closer analysis of household dust, we learn that in its micro-ecosystem it contains a plethora of information about the greater environment and its inhabitants (Charles, 2015).

House dust can form almost anywhere in the home and can lead to multiple health disorders. Studies show that a main cause for people to develop allergies is due to exposure to microbes living in household dust. There are countless different kinds of allergens, but the most common aeroallergen is the House Dust mite (HDM; Dermatophagoides sp.) and studies show that “85% of asthmatics are typically HDM allergic” (Gregory, 2011). House Dust Mites “can cause airway hyperresponsiveness and an increased frequency of nocturnal wheezing in asthmatic patients”(page 4). (Seong, 2015). Moreover fungi in dust, due to outdoor air exposure and human shedding, can also cause the development of asthma (Dannemiller 2014). Nicotine can also be found in household dust, from both exposure to secondhand smoke and when people smoke directly in their homes (Kim, 2008). It was discovered possible for a non- smoker to inhale nicotine from household dust, (Willers et all, 1995). As nicotine has a long-term presence in dust; after 21 days it still is about 40% retained from its original concentration (Kim, 2008). Cleanliness is an extremely important aspect in controlling the amount of dust in the home, which can subsequently reduce the effect that the dust has on humans. Being able to understand what kinds of microbes are living in household dust is very important for improving your overall health (Donofrio, 2012).

One of the major insights that can be taken from the analysis of household dust is that it can indicate who or what lives in that particular home. According to the University of Colorado’s microbial ecologist Noah Fierer; the bacteria found in dust can indicate the gender of the home’s inhabitant as some harmless bacteria may be vaginally associated (Charles, 2015).   Lactobacillus, a bacteria linked to females, is often found in the dust of homes with higher ratios of women (Charles, 2015). Males are typically larger which therefore means they have more skin and shed more bacteria “the fecal-associated genus Roseburia were more abundant in homes with more males” (Perkins, 2015). Pets are also a large factor in what kinds of microbes accumulate in your dust. Research shows that “In homes with cats, 24 genera of bacteria were significantly more abundant than they were in homes without cats. In residences with dogs there are higher numbers of bacteria from 56 different genera” (Perkins, 2015). The canine companions contribute a more positive addition to the dust collection with the more commonly acknowledged dander; a common term for various shedding contents from animals (Herbert, 2012).  Dr. Kei Fujimura, a molecular biologist at the University of California noted that, when exposed in infancy, the bacterium found in household dust associated with dog dander can prevent Respiratory syncytial virus in children, thus reducing the likelihood of asthma in children over their lifetime (Herbert, 2012).

The content of household dust is indicative of different people and pets, and can have numerous health effects on homeowners. Certain bacteria are produced exclusively by specific genders and animals, and can consequently indicate the inhabitants of the home. They can also affect the health of the home’s residents; causing asthma and allergies.

Blanchard O. 2015. Concentration and determinants of molds and allergens in indoor air and house dust of French dwellings

Perkins S. August 25 2015. What the microbes in your home say about you. Science Mag.

adults during and after semi experimental exposure to environmental tobacco smoke. Arch