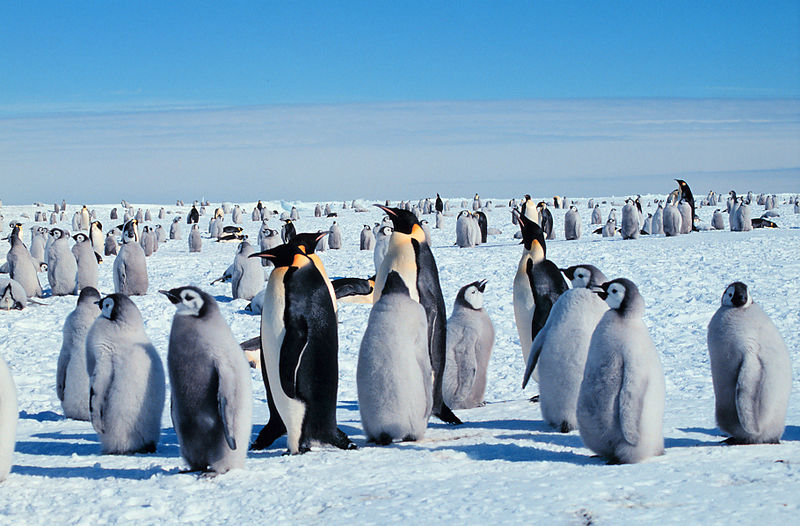 How and why do emperor penguins make such a huge sacrifice to reproduce? First of all, what is the sacrifice that they are making? Emperor penguins breed and moult in “rookeries” on thick inland sea ice, but as shoreline ice melts and food availability fluctuates, colonies undergo the cyclic behaviour of trekking back and forth to and from the sea (Le Maho 1977). The emperor’s breeding behaviour is especially strenuous; upon returning from the sea around March, the birds find mates and begin to breed (Jacquet 2005). Once the eggs are laid they are immediately transferred to the males, who will incubate them while fasting for up to 70 days. During this period, the female returns to sea to forage for food and once the female returns, the male goes to sea to forage (Croxall 1997). The rationale behind this unusual behaviour can be investigated by examining the emperor penguin’s predators, prey and the conditions the birds are subject to. Conversely, how they manage to pull off their huge sacrifice is explained by their characteristic adaptations.

Antarctica is undoubtedly one of the world’s harshest environments. On the inland sea ice where emperor penguins spend much of the year, temperatures can drop below -45°C and wind speeds can get as high as 50m/s (Zitterbart et al. 2011). So why would emperor penguins spend so much time there? First of all, breeding inland protects the birds from storms “that may destroy more exposed sea ice” and endanger their young (Le Maho 1977), and it ensures that no young will be lost in ice melts (Jacquet 2005). But beyond climatic conditions, breeding inland is an adaptation to predation. Unlike all other species of penguin, emperors breed at their rookeries in the depth of winter, when the additional frozen ice and lack of consistent breathing holes prevents predators such as leopard seals and killer whales from accessing the vulnerable masses of penguins (Cherel 2008). However, emperor penguins are the largest of all penguins; an emperor may stand up to one meter tall while their closest relative, the king penguin, stands in at only 0.35 to 0.8 meters tall (Le Maho 1977). This size means the emperor must acquire large quantities of food. Their diet consists of small fish, squid and krill (with different species being consumed in quantities that differ with seasonal availability) (Ponganis et al. 2012), and the only way to feed is to travel from the relative safety of their rookeries to the open sea. Consequently, they are forced to alternate between short feeding periods diving in the sea and long fasting periods inland.

One can imagine the immense selection pressures placed on emperor penguins to conserve their body heat and to use their energy reserves as efficiently as possible as they undergo cyclic fasting in the cold. Inevitably, they have developed physiological and behavioural adaptations that make them more equipped to deal with both the harsh Antarctic climate and the long fasts they undergo. Emperors are adapted to the climate most notably in their shape and size: they boast a body mass of 30-40kg, and a large body mass in an animal with smaller extremities tends to minimize heat loss (Le Maho 1977). The emperor’s plumage also “accounts for 85% of the total resistance to heat transfer from the core to the environment” (Le Maho 1977). Insofar as adjustments to fasting, a large body mass tends to give way to a lower “basal metabolic rate” (e.g. hummingbirds, on the other hand, have very high energy consumption) (Le Maho 1977). Furthermore, up to 10kg of an emperor’s body mass can be stored fat; the most efficient form of energy storage while fasting (Le Maho 1977). Behaviourally, the most significant adaptation of emperor penguins is the minimization of heat loss through huddling. In emperor penguins, unlike in other birds, the absence of a normal breeding territory for each couple to defend allows for the formation of huddles (Ancel et al. 2009). In a huddle, all contributors pack tightly, face the same direction, and take small steps forward “every 30-60s” (Zitterbart et al. 2011). This wave-forming behaviour most likely generates the highest possible bird density and leads to reorganization such that the members alternate between being on the outside and the inside of the group (Zitterbart et al. 2011). These huddles are very effective, given that temperatures inside can reach up to 37°C (Zitterbart et al. 2011). Le Maho (1997) describes emperor penguins as “the furthest evolutionary stage toward cold adaptation”, and their functional distinguishing characteristics make this evident.

So how and why do emperor penguins make such a huge sacrifice to reproduce? The “how” is addressed by their unique adaptations; their morphology and their behaviours have been shaped by their habitat to allow them to undergo their long trek through the arctic cold. Likewise, the question of why they display such peculiar mating rituals may actually have a straightforward answer: survival. Remaining inland would keep them from their only source of nutrition, but breeding on the shoreline would subject their young to predators and even harsher climatic conditions. The emperor penguin is therefore forced into the dangerous journey to and from the sea for the sake of their brood.

How Evolution has Favoured Obesity

How and why do Emperor penguins make such a huge sacrifice to reproduce?