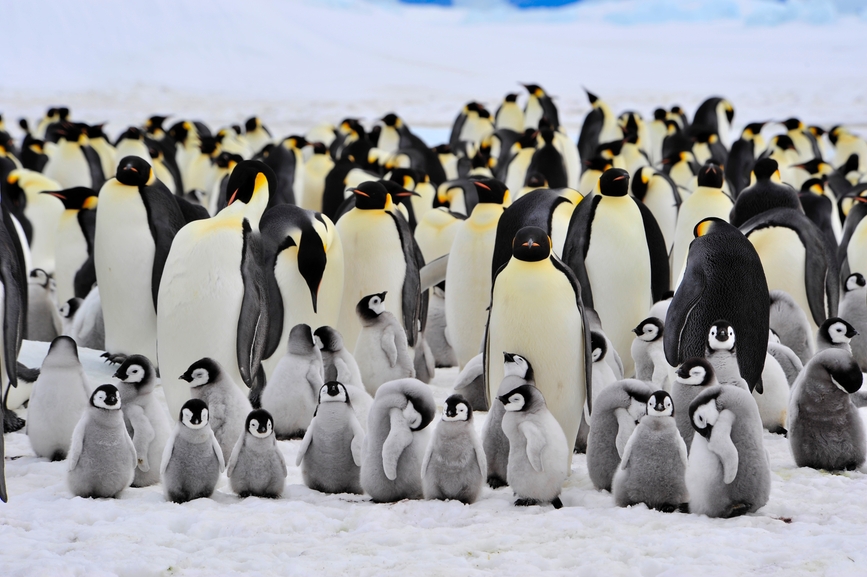 How and why do Emperor penguins make such a huge sacrifice to reproduce?

Emperor penguins have a unique breeding process that puts a large deal of stress on the wellbeing of the adult penguin, pre-eminently the males. Once the female lays a  single egg, she leaves to feed for the next four months while the male incubates the egg. The males incubate the egg while fasting and stays almost completely still, which causes them to lose around 20 kg of their body mass (Maho, Delclitte and Chatonnet 1976). The Emperor penguins have a relatively small mass of 38 kg normally, so this decrease in weight is a substantial one.(Robin, Frain, Sardet, Groscolas, Maho 1988).The egg is placed directly in between the feet and the body of the adult penguin to avoid contact with the ice (Maho 1977). The dangers of losing the egg during this process are considered high, but the male does everything in his power, including sacrificing his own health, to make sure the egg reaches maturity.

The female takes advantage of the duration of the males incubation period by feeding in preparation for the young chick. She not only prepares herself for fasting while finishing off the maturation of the egg, but also prepares herself to feed the youngling when it is finally hatched. This means that once the male’s four months of parental care are over, the female puts herself in the same dangerous position and undergoes the same physical stress for the duration of the incubation process (about 45% of the process) (Maho 1977) . The incubation process is crucial in the development of the chick. There is a huge risk for the adult penguins because they are unable to move more than a slow shuffle; therefore, they would not be able to flee under attack. Additionally, their abilities to defend themselves are severely limited because their protection radius is only as large as their beak-pecking and flipper-slapping range (Maho 1977).

Not only are they penguins at risk of dying from starvation or predators, but they also have to adapt to the severe climate conditions. Emperor penguins breed during the Antarctic winter with temperatures that can be as low as -10℉ (Maho 1997). The temperature is cold enough that huddling in large groups to conserve body heat is almost necessary. During these times of huddling, the penguins are able to bring their huddle temperature to about 20℃, opposed to the external freezing temperatures (Gilbert, Robertson, Maho, Naito and Ancel 2006).

With this evidence, it is easy to conclude that Emperor penguins take huge risks in order to reproduce. There are, however, several theories as to why the Emperor penguins endure such a drastic way of breeding. One theory being that it is due to a relationship between the breeding cycle of the penguins and the ocean production. This ensures that the fledging period of the penguin will match up with the summer ocean cycle. This cycle provides the best chance of survival for the chicks (Ancel et al 2013). Protecting their egg comes with many costs, but the adult penguins tend to put their lives at stake for the longevity of their species.

Le Maho Y. 1977. The emperor penguin: a strategy to live and breed in the cold: morphology, physiology, ecology, and behavior distinguish the polar emperor penguin from other penguin species, particularly from its close relative, the king penguin. American Scientist. 65(6): 680–693.

Ancient Human Microbes: Are They Filled With Clues of The Past?