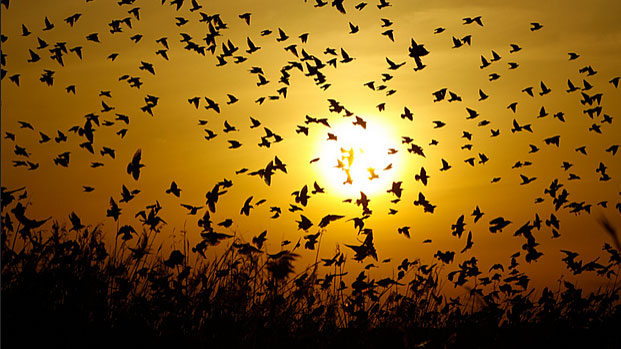 Join JC Hammer, Xanerele, Ynafets, Nastaya for a journey into the fascinating world of the migratory routes of songbirds!

Avian migration is a natural phenomenon that has intrigued scientists for centuries; studies have analysed terrestrial songbird species to migrate approximately 1,000 kilometres over open waters (Deppe et al. 2015). What is incredible about these songbirds are the similar paths that they follow. With the analysis of major flight paths, this article will focus on the coordinating elements that contribute to the repetitive use of transoceanic routes of North America by migratory birds. In accordance to studying the songbirds that travel these pathways, researchers discovered external and internal factors of migratory terrestrial species that relate to the patterns of these major routes. External factors include atmospheric conditions, stopover locations (La Sorte et al. 2014; Wiltschko et al. 2012; Felicísimo et al. 2008), and geophysical indicators (Deutschlander and Beason 2014). Internal factors include instinctual, genetic based cues and developing experience (Deutschlander and Beason 2014).

External factors include physical stimuli such as visual landmarks, olfactory triggers, and auditory signals, as well as climate, weather conditions, and wind currents (Larkin et al. 1979). For the Eastern flyway, La Sorte et al. found that migration paths are strong over the Gulf of Mexico in the spring and then over the Atlantic Ocean to reach the southern countries in the autumn; for the Western flyway, migration paths would shift from the Pacific coast in the spring to travelling through the Intermountain range in the autumn. This corresponds to certain factors such as nocturnal wind velocities, low-level jet streams and the formation of cold fronts (La Sorte et al. 2014; Deppe et al. 2015). Birds inherently use wind-assisted departures to maximize their potential speed (Wilson 1987); species will even sacrifice travelling routes of shorter distance to travel the routes with stronger tailwinds or weaker headwinds (La Sorte et al. 2014; Deppe et al. 2015; ). Terrestrial bird species will also rely on the seasonal conditions of their stopover sites and the duration of stopovers in order to refuel and rest on their journey (Deppe et al. 2015; Wiltschko et al. 2012).  They also have been shown to have the ability to identify spatiotemporal pathways and barriers, planning their migration around them resulting in a lower energy cost (Felicísimo et al. 2008). Stopover habitats also correlate to available food supply along the routes; “migrants have shown seasonality in their use of these stopover habitats…which in some cases has been correlated with changes in insect intensity” (La Sorte et al. 2014).

Internal factors combine the use of birds’ natural compass mechanics which make use of geomagnetic as well as celestial cues to more accurately navigate. “Young birds rely on innate, genetically encoded directional information” (Wiltschko and Wiltschko 2012) on their first migration. This instinctual ability allows them to use the technique of local piloting, which makes use of air currents and visual landmarks, to orient themselves, and vector navigation or ‘clock-and-compass’ navigation which allows them to continue in a specified direction for a period of time, but does not account for route disruptions (Deutschlander and Beason 2014). As juvenile birds gain experience on each leg of their journey during migration they acquire a basis of physical, internal, geomagnetic and celestial cues that will contribute to the development of a geophysical map. In the case of route disruption mature birds use true navigation, which incorporates the use of this map, to determine its location with respect to its destination and adjust its path accordingly in order to reach its goal (Deutschlander and Beason 2014).

Ultimately, the naturally occurring genetically encoded information and ability of birds in combination with the techniques and skills developed as a result of information acquired only through experience, results in the use of an array of external and internal information enabling birds to accurately navigate their migratory path each year in coordination with seasonal conditions. Used in combination, these factors allow migratory birds to accurately navigate their routes each year.

Author: Join JC Hammer, Xanerele, Ynafets, Nastaya for a journey into the fascinating world of the migratory routes of songbirds!

Effects of Epiphytes on the Health of Rainforests