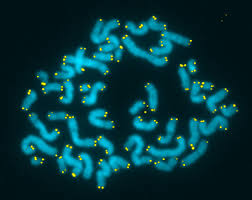 In this paper we will attempt to answer the question of whether telomere has an effect on aging and disease. Telomeres are non-coding amino acid sequences on the end of eukaryotic chromosomes that protect the chromosome from degradation during replication and prevent fusion with the ends of other chromosomes (Zhao et al. 2014). On average, human cells lose 50-100 base pairs from their extremities in every round of division (Harley et al. 1990). During replication telomeres are shortened because the nucleotides covered by the RNA primer are not copied by DNA-polymerase (Zhao et al. 2014). Therefore the rate that telomeres shorten has been shown to be affected by age, genetics and lifestyle choices (Leung et al. 2014, Zhang et al. 2015, Kappei, Londoño-Vallejo, 2011).

As cells divide, the enzyme telomerase will elongate the telomere when it gets too short (Zhao et al. 2014). However, as individuals age telomerase becomes less active and is less able to maintain telomere length (Zhao et al. 2014). A source of disagreement between researchers is how to measure whether telomeres are shortening or elongating. Variance in telomere length data reveals that the father’s age at the time of conception is correlated with the initial length of the offspring’s telomeres (Holohan et al. 2015). There also seems to be consensus in scientific literature that “Inheriting very short telomeres seems to have a negative contribution in lifespan in situations where aging rate would be accelerated” (Kappei, Londoño-Vallejo, 2011).

Shortened telomeres have been shown to increase a person’s risk of age-related diseases such as Alzheimer’s and types of cancer (Zhang et al. 2015). Discrepancies in the research community arise if the cancer is of the liver, head, neck, esophagus or colon where longer telomere length causes an increase in the mortality (Pusceddu et al. 2015). An example of this would be when Weinstein and Ciszek suggested that longer telomeres would cause an increase in cancer rates. An alternative explanation to their hypothesis is that long telomeres are selected against because of their cancer promoting effects, which suggests that the cellular proliferation effects of long telomeres cause increased energy expenditures (Eisenberg DTA 2011). In patients with similar cancers and similar telomere lengths, survival is often illustrated by the age of the individual, (Zhang et al. 2015), suggesting that telomere length alone is not a reliable indicator of health.

Telomeres are also subject to lifestyle choices such as smoking, obesity, stress, diet, exercise, exposure to harmful chemicals and socioeconomic status (Kappei, Londoño-Vallejo, 2011). Research has shown that every pack of cigarettes smoked is equivalent to the loss of 5 telomere base pairs (Valdes et al. 2005). Over a 40 year period, this is equivalent to 7.4 years of life (Shammas 2012). A correlation between BMI and biomarkers of DNA damage independent of age show an increase in oxidative stress, which “can induce DNA damage and may therefore expedite telomere shortening” (Shammas 2012, page 4). There have been interesting studies in which there have been dietary restrictions implemented on animals. This has led to positive impacts on health and lifespan by reducing oxidative burdens and DNA damage, which keeps them in a younger biological state and their lifespan is increased by 66% (Shammas 2012).