Our DNA Makes The World Go Round [Internet]. UNSW Australia; School of Biotechnology and Biomolecular Sciences. Available from: https://www.babs.unsw.edu.au/. 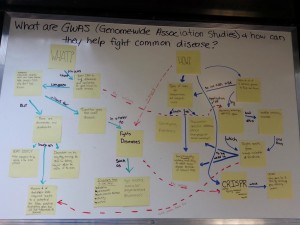 The human genome contains thousands of genes and is unique to every individual on the planet. Genes control every aspect of a person’s life from hair colour to the diseases they may contract. Genome Wide Association Studies (GWAS) examine DNA samples and single nucleotide polymorphisms (SNP’s) from genetic variants from many individuals to see if they can associate it with common traits and diseases. It does this by finding “tagged markers” on loci and comparing them with the genes of people known to have a disease (Visscher et al 2012).  Genome-wide association studies started in 2005 and is are a way to determine where a trait, such as genetic susceptibilities to a disease, is represented in the genome (Chandra et al. 2014). It uses samples from many different ethnicities and compares them with likewise genes, such as Asians with Asians and Africans with Africans (Chandra et al, 2014). The genes that are affected can cause the inferior structure and function of proteins. An example of this could be the improper folding of proteins which causes them to function differently in the body (Lipika 2015). Some of the common diseases that GWAS has found disease causing loci for include heart disease, diabetes, auto-immune diseases, ophthalmology, age-related macular degeneration, Crohn’s disease, and Bipolar disorder, and psychiatric disorders (Visscher et al 2012). Nucleotides are the building blocks of DNA, and polymorphisms are variations in the order of those building blocks. The combination of these building blocks and their variability creates a unique strand of information that we are then able to use to recognise the relationships between the DNA sequence and the occurrence of the associated disease. A possible way of applying the knowledge gained from GWAS in the future is the application of CRISPR. CRISPR is a technique used to edit the genome of humans and other higher organisms (Mangericao et al. 2016). There are some drawbacks to GWAS. For starters because it looks at every gene there is a high probability of false positives (Visscher et al 2012). This major issue in genome-wide association studies is called population stratification which is described as “the characteristics of a sample population to enable the occurrence of spurious statistical findings” (Lacour et al. 2015); meaning the likeliness of receiving false positives due to too small of a sample size being examined.  To account for to this reduction in accuracy genomic controls are applied, where independent SNPs not relating to the disease are marked, eliminating them to reduce inflation and increase accuracy of results (Lacour et al. 2015). Due to population stratification extremely large population samples are needed in genome-wide association studies so Lacour et al. developed an algorithm to reduce and control the amount of type I errors (false positives) in a study’s results (Lacour et al. 2015). With a better understanding of these genetic diseases and their origins the medical treatments for such diseases can be improved by enabling direct interference in the genetic variation creating the disease. This would be less invasive, less expensive and more accurate in treating or preventing these conditions. Genome-wide association studies are not the direct cure-all solution for common diseases but it is the next step to finding answers by allowing the continuation of research and search of faults in our genome which then treatments can be created.