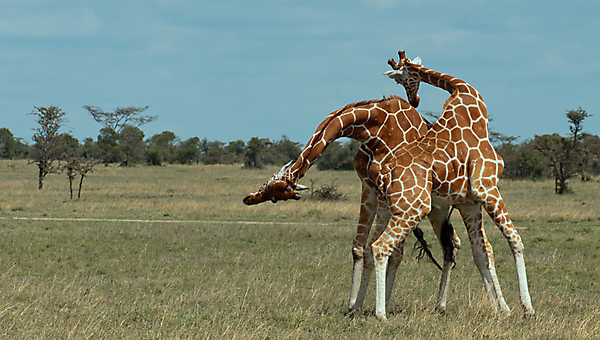 Reproduction is the natural process among organisms by which new individuals are generated and species perpetuated. (Houghton Mifflin Company. 2002). The costs associated with sexual reproduction are high in respect to the amount of time and energy expended for both sexes, however the costs are differential. The costs of reproduction to the sexes is described by the Bateman-Trivers theory of the fundamental asymmetry of sex (Levine et al. 2014). In general this theory states that females invest a large amount of energy to produce a small finite number of large gametes, eggs, and males invest a relatively small amount of energy to produce an enormous amount of small gametes, sperm (Lane et al. 2009). This theory can also be referred to as anisogamy (Hayward and Gillooly 2011). Females are “choosy” in regards to selecting mates because of the limited number of eggs they produce (Lane et al. 2009). To maximize offspring survival they must chose to reproduce with a male that has good genes or traits (Lane et al. 2009). Therefore, female reproductive success is limited to selecting a mate with good genes (Levine et al. 2009). Whereas male reproductive success is limited to the number of females he can inseminate and therefore his ability to attract mates (Levine et al. 2009). Thus sexual selection which occurs when individuals within a population have differential success in attracting mates predominantly acts on males favouring traits that help attract mates. This selection leads to sexual dimorphism, attracting females has never been simple for any species; colourful feathers, bright patterns, loud songs etc. are needed to get their attention.These features are beneficial to reproduction, but could negatively affect survival (Peters et al. 2004). In addition the use of testosterone to create or maintain these sexually dimorphic traits may lead to a decrease in immune system (Peters et al. 2004). The individuals that are best equipped to survive and reproduce perpetuate the highest frequency of genes to descendant populations. This is the principle known colloquially as ‘survival of the fittest,’ where fitness denotes an individual’s overall ability to pass copies of his genes on to successive generations. ( Britannica Encyclopaedia. 2014). An example, when fighting over a female, the giraffes will establish dominance via high or low intensity ‘necking’. The low intensity version of necking involves pressing their necks against one another until one gets tired and gives up. In high intensity necking, they’ll swing their heads and necks at each other trying to land blows on the other giraffe (Daven Hiskey. 2012). In general females use more energy and thus pay a higher price to produce gametes, but males use a large amount of energy to attract mates by means in which may inhibit, or negatively affect survival.

In addition to investing large amounts of energy to produce gametes females usually have to spend time and energy to internally develop offspring (Lane et al. 2009). During and after pregnancy females also require extra energy and nutrients for Lactation, in most cases the female body needs to undergo organ remodelling to meet the high demands of lactation (Speakman 2008). After birth it is most common to see extended maternal care in which the mother will protect offspring for a few weeks up to a few years to ensure survival (Levine et al. 2009) Grizzly bears are one of the most common species with maternal care (Royle et al. 2012). However, although relatively rare in nature co-parental and paternal care do exist. In cases where paternal care is present the male often risks his life to protect the mother and the offspring. The male must now supply the female and the offspring with food and nutrition and the protection to keep her alive. If anything were to happen with her or the offspring, the male’s traits would not be passed on. With the amount of energy this would take males may pay ‘opportunity costs’ by wasting times and energy locating, courting, mating with and guarding pregnant females, which decreases mating opportunities with other females (Schultz et al. 2015). However, putting in this much energy ensures that the male’s traits get passed on. If the particular species is not intended for paternal care, this may be a waste of time, in species such as lions co-parenting continues until the offspring is mature and able to survive on their own (Royle et al 2012). There are occasional species that have paternal care, offspring brooding is a non-behavioural form of parental care where parents carry their offspring after hatching or birth. Some species carry their offspring externally…other species carry offspring internally in specialized brood pouches, (Royle et al. 2012) examples of these species would be the male penguins, and male seahorses. In this case, males have to expend energy to provide food for their offspring until they are able to do so, on their own.“ Food provisioning is found in species where parents provide their offspring with a source of food after hatching or birth… Progressive provisioning may be based on food that is obtained directly from the environment, as in many passerine birds which feed their offspring a diet mainly consisting of arthropods” (Royle et al. 2012).

In order for the offspring to have the best possible chance of survival, the male parent must dispense a vast amount of energy before birth. However, Based on the amount of energy invested to produce gametes, develop the fetus, lactate and provide post-birth care females pay the higher cost for reproduction. Males suffer from reduced rates of survival from competition and sexual selection, however, because of relatively high rates of gamete production can produce more offspring with multiple females and therefore have relatively higher Darwinian fitness. The benefits of reproduction outweigh the costs from an evolutionary standpoint for males

Why are the proteins of polar marine organisms making it hard for them to adapt to warmer temperatures?