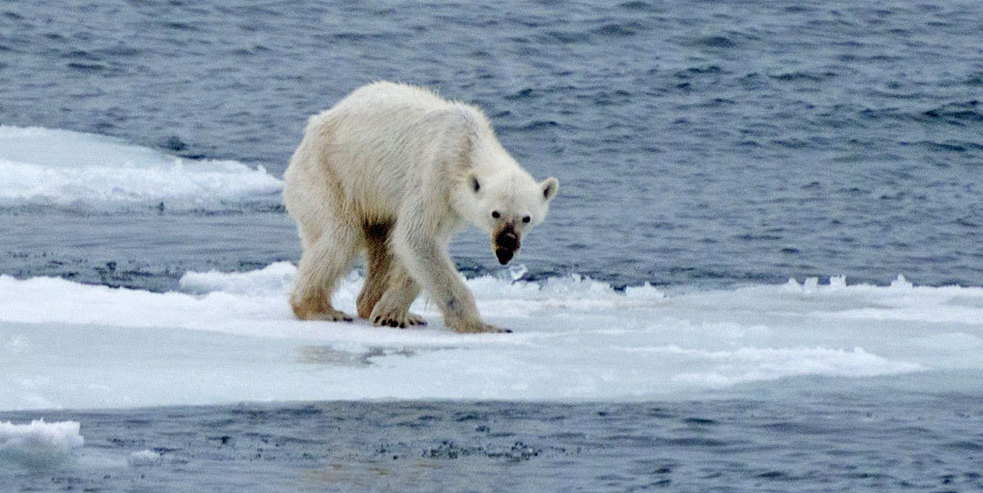 Why are the proteins of polar marine organisms making it hard for them to adapt to warmer temperatures?

Notothenioid fishes, for example, have a decreased blood vessel count as well as an antifreeze-like protein that allows crystals to form in the blood to prevent it from freezing (Cziko et al 2014). Although these adaptations were once beneficial to the fishes, they now present a problem as the crystals formed during winter do not melt when temperatures rise again, and an accumulation of these crystals can be lethal (Cziko et al 2014). Warmer temperatures cause the water to lose oxygen, nutrients and, in terms of PH, become more acidic. Oxygen is more abundant in colder waters, and in addition to the low number of hemoglobin present in Antarctic fishes the increasing temperatures have made it difficult for them to gain enough oxygen to sustain themselves (Jabr 2012).

However fishes are not the only organisms being affected by climate change, as polar bears are suffering as well. Allele proteins are also changing in polar bears who have developed an increase in alopecia. Alopecia is a disease associated with degenerative health and hair loss as a response to the increase in temperature (Bowen et al 2015). “In 2012, 28% of polar bears sampled in a study in the southern Beaufort Sea region of Alaska had varying degrees of alopecia that was concomitant with reduced body condition” (Bowen 2015). Percentage of polar bears affected by alopecia has significantly risen since their last recorded study roughly 20 years prior. This is caused by genes affecting the proteins in their body; “gene transcription is the process by which information from the DNA template of a particular gene is transcribed into messenger RNA (mRNA) and eventually translate into a function protein” (Bowen 2015). The bears that have developed hair loss from alopecia have become fit for warm climates and thus reproduce more often than those without it. This is a concern as the bears are passing on a disease, not an adaptation; this is making it harder for them to adjust to temperatures because they are not acquiring beneficial genes. The proteins that code for healthy genes in bears are becoming a disadvantage, and are making it difficult for healthy populations of polar bears to survive in warm temperatures.

In conclusion, the rapid incline of temperatures in the arctic have some organisms struggling in an attempt to adapt positively. “The Antarctic icefishes (Family Channichthyidae) provide excellent examples of unique traits that can arise in a chronically cold and isolated environment” (Sidell et al 2006). However, as the conditions become warmer the ice fishes’ antifreeze and hemoglobin protein adaptation to cold weather becomes a life threatening process. The DNA of polar bears being turned into proteins has developed a disease of alopecia and is tactlessly transferring disruptive health genes on. These adaptations are causing more problems and are not protecting them from extinction.

Can the microbes in prehistoric man gives us clues to our distant past that may help us now?