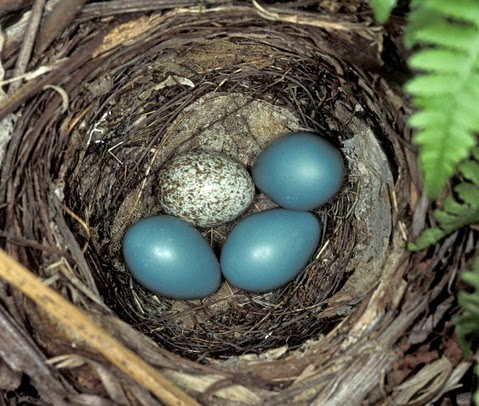 Can you bring up my baby? Why do some birds lay eggs in other birds’ nests?

Certain birds discard parental duties, and instead lay their eggs in other bird’s nests; this is known as brood parasitism (Fernbank Science Centre 2016). Brood Parasitism is a reproductive strategy that female birds use to increase their fitness (Fowler Neal 2015). It occurs when one bird lays their eggs in another bird’s nest, tricking the host into bringing up their babies (Fernbank, 2016). Cuckoos and cowbirds are well known for this type of behavior (Fowler Neal 2015). They are often observed abandoning their offspring in many different species’ nests; a tactic commonly called Obligate brood parasitism (Fowler Neal 2015). When this behavior occurs, birds give away all responsibilities to another species of bird, laying their eggs in the host’s nest; whereas, non-obligate birds lay eggs in the nest of the same species, both are forms of brood parasitism (Fernbank Science Centre 2016). If the parasitic parent fails to discard host eggs, hatched parasitic young may fight to kill the host’s young, taking over the nest (Payne 1998). Parasitic birds benefit from: increased fecundity due to greater allocation of resources, and ability to produce more eggs rather than defend nests, incubate eggs, and feed their young (Croston & Hauber 2010). Brood parasitic species use more than one host species, and the hosts are usually birds that take good care of their young, feeding them rich food (Payne 1998).

Over time hosts have been able to recognize parasitic eggs, usually noticing a difference between the two sets of eggs in the nest through the rule of discordancy, when this happens the host will get rid of the minority set of eggs (Moskat et al. 2015). Although host birds have defenses to protect their nests, there are times when the host accepts the unfamiliar egg, even if it decreases their own reproductive success (Payne 1998).  There is knowledge that female hosts care for parasitic eggs because the risk that she could damage her own egg while trying to destroy the intruders is much too high when compared to raising the egg (Payne 1998). But, in the case that the parasitic eggs hatch before the host eggs, the host parent will then choose to abandon her nest and both young completely (Payne 1998).

There are two major hypotheses for the maintenance and evolution of brood parasitism: evolutionary lag hypothesis and the evolutionary equilibrium hypothesis (Croston & Hauber 2010). Evolutionary lag suggests that hosts accept foreign eggs because they have no way to defend their nests against other birds; however, there are times when parasitic eggs aren’t accepted and this is due to the fact that host birds have created defences against parasitic strategies (Croston & Hauber 2010). This struggle can be exemplified by observing the similarity in size and colour between both host and parasite eggs (Moskat, Zolei, et al. 2014). Evolutionary Equilibrium states that “hosts accept parasitism only because the cost associated with the rejection of parasitic eggs is greater than the cost of rearing cowbird offspring.” (Croston & Hauber 2010). This hypothesis also looks at the potential of hosts damaging their own eggs with the mistaken assumption that it was a parasitic egg; moreover, parasites have the potential to harm their own eggs while getting rid of the host’s original eggs (Croston & Hauber 2010). Evolution has led to hosts becoming more aware of unfamiliar eggs and acting more aggressively when brood parasites are in the vicinity (Kleindorfer et al. 2013).

Although many hosts are able to maintain their fitness though either increased defenses or acceptance of brood parasitism, there are unfortunately some at risk species facing further endangerment (Croston and Hauber 2010). In fact, Croston and Hauber (2010) suggest that the cowbird population in North America may have to be controlled in order to protect species like the Kirtland’s Warblers, Black-capped Vireos, Least Bell’s Vireos, and Southwestern Willow Flycatchers. Brood parasitism is not a new phenomenon for these endangered species, but deforestation has increased the habitat of cowbirds and therefore increased their population; ultimately causing a selective pressure on at risk species (Croston and Hauber 2010).

Overall, it’s clear why some birds lay eggs in other bird’s nests; it allows them to produce an abundant amount of offspring, without using energy to care and raise their young. This results in an increased fitness for the expecting mother, despite the instances where she did not succeed. The most commonly studied brood parasitic birds are the cuckoo and cowbirds, both obligate (Payne 1998). However, there are many species around the world that participate in obligate and non-obligate brood parasitism; all having similar motives and receiving similar benefits.