The answer to this question, like most in biology, is it depends. Sex alone does not determine who has more parental expenditure or parental investment because sex roles are not absolute throughout the animal kingdom. Often the mother is the main caregiver, however in some genus’ neither sex will raise their offspring while in some both raise their offspring together. There are even a few where the male takes the reins in childbirth. In order to fully answer the question of who pays the higher price both parental expenditure and parental investment must be examined in these four types of reproductive patterns.

Panthera is an example of a genus where the mother is the main caregiver. Males have to fight to keep their territory, but females can be the victims of ‘Female-Starvation’ (Carter 2015). This occurs when a non-dominant female can’t support her nutritional needs – much less a pregnancy – because of other dominant females. On average, a male tiger must consume approximately 7225kcal/day, but a pregnant or mother tiger must consume around 10,341kcal/day (Miller 2014). This increased food demand makes the female tiger susceptible to starvation, and she may leave her cubs unprotected to hunt. When cubs are left alone they become vulnerable to infanticide. Male leopards were found to be the cause of all infanticide inst

ances, making up 49% of the total deaths (Balme 2015). If the cubs dies the female leopard is forced to restart the costly cycle of reproduction. These factors make it clear that in this parental arrangement the female is paying the higher price.

In the case of the Chelonia Mydas, or Green Sea Turtle, neither the male nor the female care for the young before or after they are hatched. Both the male and female travel long distances to find their preferred nesting sites. The male pays the higher price in this case because the male makes this journey annually, whereas the female makes the journey every 3-4 years (Mortimer and Carr 1987). After mating, the female makes the journey up the beach to dig her nest and lay eggs, which she then buries afterwards. (Lutz, et al. 2002). This strenuous and tiring process has a high cost for the female. Also the female lays about 100 eggs 50 or so times in her life but only about 2-3 of those offspring actually survive to adulthood. Since the female has such high energy expenditure and investment compared to the males, the female pays the higher price for reproduction.

The Penguin is a genus where both parents care for the offspring. The males incubate the eggs for 65-75 day (Younger 2015). During this he, under harsh conditions, freezing temperatures and starvation, carries the egg. After all this, if the offspring dies then the parents lose a whole season breeding, which is a disadvantage to penguins because they have a slow reproductive rate (Bradford 2014). During this time the female travels a long journey to find and store food for the chick. When the chick hatches the male must feed it with the little food he has left. The female returns back from the sea and finds her mate. 10% of the time the female does not return and the offspring dies, wasting all of the male’s parental investment and energy (Bradford 2014). Since both parents spend an equal amount of energy and investment they pay an equal price in this parental arrangement.

Hippocampus, or seahorse, is an example of a genus where the male takes the reins in childbirth. A female develops eggs, but then transfers them into a male’s pouch (Wilson 2003). There males fertilize and hold the offspring until they are released. Boisseau (1967) thought that most of the energy required for embryonic development is derived from the female, but males nourish, osmoregulate, and protect the embryos during pregnancy (Wilson 2003; Danielson 2002). Seahorses are also monogamous (Kvarnemo et al. 2000). This means that even though the males are expending large amounts of time while pregnant they are not paying a higher price because the females are not free to impregnate more males. There is also no sex role reversal observed in seahorses, so females do not compete for males (Wilson 2003). In this parental arrangement, females and males pay an equal price in reproduction because they are monogamous and both heavily involved in pregnancy. 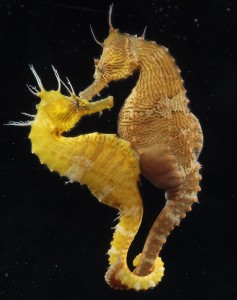