One of the most complex and important legacies of the sea otters of British Columbia’s coast lines is the role they have in maintaining balance in coastal ecosystems, and we must have balance. If we tip one end of the scale, such as taking away a vital part of a system, or adding more pressure to the other side, they soon become unstable. At one time, humans managed to destabilize one aspect of our ocean’s ecosystem by hunting sea otters for their pelts, and were thought to be extinct due to the Pacific maritime fur trade. The entire ecosystem was affected when these adorable furry critters, who were easily found in bays and harbors around the shores of Vancouver Island and all up the pacific coast, were nearly decimated. The resulting changes in the ecosystem shone a light on the importance that this key predator is to its environment. By examining how the sea otter’s diet affects the chemistry of the ocean, it is possible to conclude that the sea otter plays a vital role in sustaining carbon sequestration from the ocean and the atmosphere, thus combating climate change.

In the early 1800’s, the pelts of sea otters on the west coast were so valuable, up to $200 (Scheffer V. 1940), that the otters were nearly hunted into extinction. After they had been reintroduced and had rebounded in population, the real importance of the otters became apparent with their connection to carbon sequestration and their role in the food chain. In a nutshell, ocean kelp absorbs carbon dioxide from the atmosphere, while sea urchins graze on kelp and the sea otters eat the urchins. A basic food chain of life is shown, perfectly in balance, until one aspect is affected to an extreme level. Human activities had disrupted the ecosystem by removing a predator responsible for helping to regulate the carbon dioxide concentration in the ocean and in the atmosphere.  Wilmers et al. (2012) wrote “ Although questions remain concerning the pathways and compartments of kelp C flux and storage, sea otters undoubtedly have a strong influence on these elements of the carbon cycle.” When we look at the grand scheme, if we allow a certain species to go extinct, there will always be a lack of resources somewhere, leading to a complete loss in a whole individual system 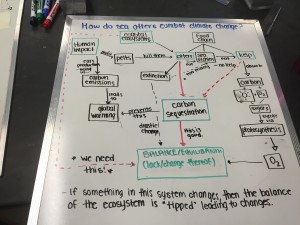 As it turns out, the urchins, a component of the otter’s, were able to populate more rapidly without any otters, which destroyed the kelp forests (Stewart & Konar, 2012). As kelp are a prime natural sequester of carbon dioxide from the ocean (Wilmers et al. 2012), this leads to increased levels of dissolved carbon dioxide in the oceans. The “presence of otters increases kelp forest carbon storage by 4.4 to 8.7 megatons. It would take 3-6 million passenger cars to equal that amount of carbon dioxide pumped into the atmosphere” (Wilmers et al. 2012.)  The buildup of carbon dioxide would lead to increasing concentrations of carbonic acid, thus decreasing the pH, normally around 8.1, of the ocean-water.  Otters eat sea urchins, which though healthier kelp populations will help maintain the pH balance for the continued existence of , in particular, crustaceans, which are vulnerable to ocean acidification (Whiteley, 2011).

While it is crucial that otter exist naturally in their own habitat in order to sustain equilibrium among organisms, it is important to acknowledge that the balance is also what sustains the otters existence.  If the population of sea urchins had been decimated instead, it would lead to the same result, as the otters would suffer. If the kelp had been adversely affected, the sea urchins would find their food elsewhere. Ultimately, the sea otters play only one role in the multi-faceted system where balance requires the activity  of multiple organisms. In many ways, the world works together form the tiniest little microbe, to the human civilization. If one tips this scale from making a species go to the brink of extinction, to overpopulation in another species, it shows how easy it can be to disrupt a system, and eventually destroy and disturb equilibrium in an ecosystem.  The balance and health of coastal ecosystems is a sum greater than the individual parts, such as the otters eating sea urchins.  I mean, look at this little gaffer, who would ever want to hurt him?