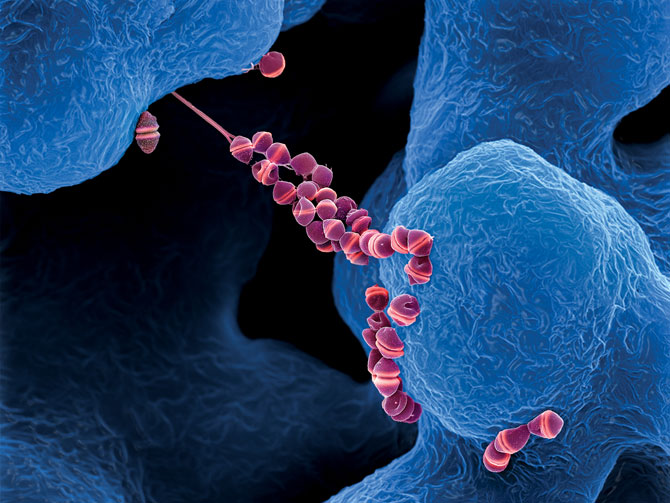 Photograph by Martin Oeggerli, with support from School of Life Sciences, FHNW of Streptococcus

There are thousands of species of microorganisms that reside in our homes, from types of bacteria, and fungi, to viruses. Looking at each type of microorganism present in a household can paint a picture of where, and how we live our lives.

The two most common types of microbes found in the everyday households are classified as fungi and bacteria. In fact the majority of species found in the household are originally transferred from the outside environment (Charles 2015). The geographical location of the person’s dwelling allows varying types of microbes to thrive. This is because the location can affect the temperature, humidity and the seasons which all play a part in the growth of microbes. 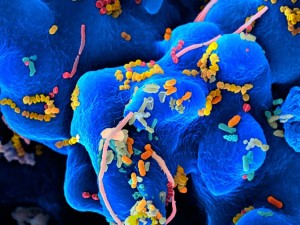 Photograph by Martin Oeggerli, with support from School of Life Sciences, FHNW

For example, a study done in a French community discovered that Cladosporium and Penicillium were the most common fungi found in over 80% of tested households. Further, the study showed that “In the warm season, median temperature and median relative humidity were associated with increased Cladosporium and total mold concentrations” (Dallongeville et al. 2015). This shows that houses in areas that have a mild climates are more likely to have higher concentrations of fungi such as Cladosporium. This information can also be used to tell the living condition of the individuals by looking at the level of fungi biomarkers. Houses in damp environments would have higher levels of Cladosporium while a house within a drier environment would contain lower levels (Sordillo et al. 2010). Microorganisms found in household dust can also reveal the composition of residence, from pets to gender and age of people. An example would be the prominent correlation between the varying types of bacteria found on the skin of males versus females (Charles 2015). A person would be able to determine the genders of the people within the house by the microbes that are present. The results of a study done comparing microorganisms in child care facilities and senior homes showed that the lower the age of occupants, for example children, the higher the median of bacterial and fungal concentrations (Madureira 2015). This reveals that bacteria and fungi levels can be used to determine approximate age of inhabitants. Another aspect that has a major impact on the microorganisms is if pets are present within the household. “Pet ownership and pet allergen levels were positively associated with higher levels of fungi (β-d-glucan) and GNB (midchain 3-OHFAs and endotoxin)” (Sordillo et al. 2010). You can also get an idea of the habits of the occupants found within that household. For instance, it was discovered that people who regularly vacuum their home 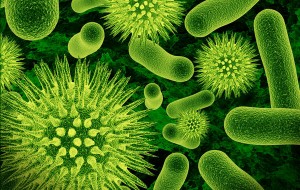 (at least once a week) had a decrease in the concentration of fungi like Alternaria (Dallongeville et al. 2015).  Therefore it is not a surprise that cleaner people are more likely to have less microbes found in their home. Another example was found in a study, there was a direct correlation between nicotine concentrations within a household and dust levels (Whitehead et al. 2009).  Smokers who smoke indoors will also have higher level of nicotine found in the dust. Interestingly it was found that they had higher levels of nicotine found in the dust in their home than people who smoked indoors (Whitehead et al. 2009).

In conclusion, microbes found in household dust can relay a great deal of information about where a person lives, who lives in the house and finally it can also gives an idea about the habits of residents.

Can you bring up my baby? Why do some birds lay their eggs in other bird’s nests?