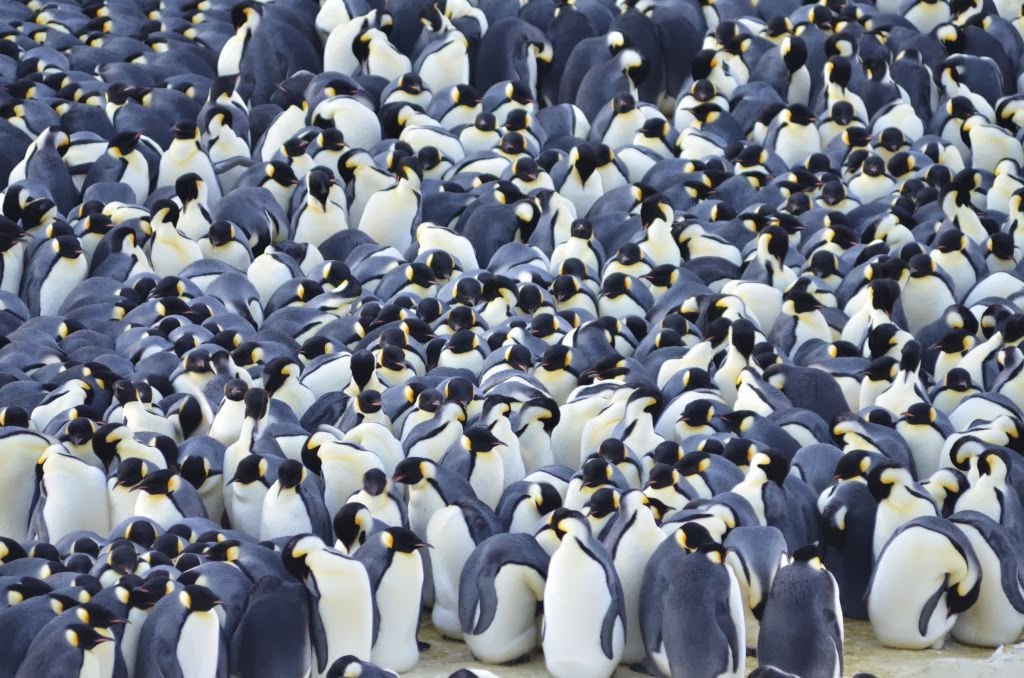 Emperor Penguins, like so many organisms studied today, exhibit impressive adaptations to their environment. However, the Emperor Penguin, Aptenodytes forsteri, (Gilbert et al. 2008) endures an environment—and even more notably, a breeding cycle—that one would deem contrary to their evolutionary success as a species. So, how and why do Emperor Penguins succeed despite making such risky investments? Research proves that this species is morphologically and behaviourally equipped to defy the odds of survival.
Emperor Penguins are the only birds to live entirely on ice (Pilchner [unknown date]) and to breed during the harshest months of Antarctic winter. In part, they owe a large chunk of their success to their unique physical characteristics. On average, a mature Emperor Penguin stands 1.3m tall and weighs close to 36kg (Pilchner [unknown date]). Being the largest among penguins species, their low surface area to volume ratio (Gilbert et al. 2008), as well as their overlapping plumage and metabolically inactive blubber (Pilchner [unknown date]), work effortlessly to minimize heat loss. Aside from their mere physicality, Emperor Penguins are also equipped with bodily mechanisms that “economise energy use” (Pilchner [unknown date]) and ultimately ensure reproductive success. For example, Emperors have a systematic way about their nasal passages that allows them to recapture up to 80% of the heat normally lost via breathing (Ward 2001). Similarly, blood flow to their extremities (i.e. legs, flippers) undergoes what is referred to as “countercurrent heat exchange” which transfers heat from blood moving away from the body to the passing blood moving towards the body, enabling them to maintain a consistent core temperature (Ward 2001). It is such brilliant adaptations that enable Emperor Penguins to call Antarctica home.
Antarctica is a desolate land mass of snow and ice, threatened by -60°C temperatures and 180km/hr winds, hundreds of kilometres away from the nearest food source (Pilchner [unknown date]). Here is where Antarctica’s sea ice is most secure (Ancel et al. 2009); here is where breeding among Emperor Penguins begins.
As a result of the size and the level of maturity of Emperor Penguin hatchlings, this reproductive process requires parents to fulfill gender specific, though equally strenuous, roles. For the female Emperor Penguins, the primary sacrifice they make is the initial input of energy and nutrients into the formation of the egg, so that when it hatches, the chick does not succumb to exposure (Groscolas 2001). Once the egg is laid, the female passes it on to the male for incubation. This is a tricky and crucial part of the Emperors reproduction cycle because for the egg to merely touch the ice, is too cold for the baby to withstand (Emperor Penguins 2015). Afterwards, females trek 50–120 km to replenish their stores (Emperor Penguins 2015). This journey puts these females penguins at high risk so must “synchronize their breeding schedules” in order to stay together and maintain bearable body temperatures (Ancel et al. 2013). Males on the other hand are responsible for incubation and the ultimate safety of the egg. Their duty is to maintain the egg their mate has bestowed upon them at a temperature of 35°C (Gilbert 2008) while facing the same grueling winter conditions as the female relying on the use of body fat for energy: Amidst these grueling winter conditions, both genders rely almost entirely on stored body fat for energy in order to successfully carry out this reproductive process (Groscolas et al. 2001).
Evidently, as mere individuals, Emperor Penguins are physically resilient, but when vulnerable offspring are thrown into the mix, survival becomes ever more risky. To overcome these reproductive obstacles, Emperor Penguins must rely on one another. Due to their unique lack of territoriality (Ancel et al. 2009), Emperor Penguins call on tactful huddling dynamics. These huddles can include up to 10 individuals per m2 (Pilchner [unknown date]) and work to significantly reduce each individual’s metabolic rate so he may endure long and cold fasting periods and ultimately fulfil the task of incubation (Gilbert et al. 2008). “Huddling [penguins] maximize energy savings by reducing the body surface area exposed to cold, thus decreasing heat loss, and by warming their surrounding environment” (Ancel et al. 2014). Without huddling, males could only fast for approximately 60 days total (Ancel 2009); without such vigilance and collaboration, this species could not survive (Pilchner [unknown date]).
One would assume that the mere desolation would repel any living organism from inhabiting Antarctica, let alone in the dead of winter. However, this is a species comprised of resilient, coordinated, and efficient individuals. Emperor Penguins have adapted morphologically and behaviourally, ultimately combining their collective efforts to achieve one common goal: defying the odds of survival through successful reproduction.