Example of an parasite egg. Available from: https://en.wikipedia.org/wiki/Brood_parasite#/media/File:Eastern_Phoebe-nest-Brown-headed-Cowbird-egg.jpg

Can you bring up my baby? Why do some birds lay their eggs in other bird’s nests?

Some birds lay eggs in other birds’ nests. In order for this to be a stable reproductive strategy, there must be some benefit to birds who do not raise their own offspring. Furthermore, there must be some effect on the bird whose nest has been exploited. The process of exploiting another bird’s nest is called avian brood parasitism. 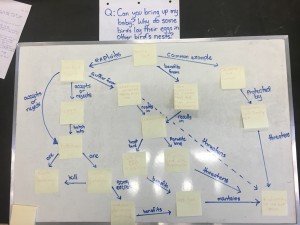 Brood parasitism is a rare reproductive strategy by which a parasitic organism exploits a host organism by forcing it to raise young other than its own (Lyon and Eadie 2008). One common type of parasitism, called “egg dumping”, occurs when one bird lays eggs in another bird’s nest. More specifically, brood parasitism can be interspecific; eggs are laid in the nests of birds of the same species, or intraspecific; eggs are laid in the nests of a different species (Crostan and Hauber 2010). Two species commonly known for brood parasitism are the great spotted cuckoo and the brown headed cowbird (Röder et al. 2014). However, over two-hundred species of birds are known to lay their eggs in another birds nest. The host bird either raises the parasitic offspring or attempts to reject them (Johnsgard 1997). Most often, brood parasitism exploits the host bird while benefiting the parasite bird. While parasitic birds may sound like they only hinder the parenting capabilities of the host bird, the relationship may actually be mutualistic, implying a relationship that benefits both the parasitic bird and the host. For example, there are cases where the parasite hatchlings produce predator deterring compounds, which increases the ability of all offspring to survive (Röder et al. 2014). One such case occurs when hatchlings of the great spotted cuckoo are harassed (Röder et al. 2014). 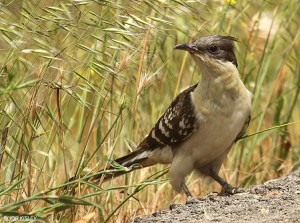 By laying eggs in another bird’s nest, the parasitic bird relieves itself of parental duties, which frees up resources that it can then use to increase its own fitness (Soler 2009). In other words, without the duty of raising its offspring the parasite bird has more time to mate and produce more offspring as well as obtain resources for its own survival.  The host bird however, does not get these benefits. The main downside to the host bird is that it uses up all of its resources on feeding and caring for the parasitic hatchling, while its own eggs do not get enough resources to survive. For this reason, host birds, which are of a different species to the parasite bird, have developed methods to detect and remove parasitic eggs or hatchlings. However, attempting to remove parasitic eggs may result in damage to the host bird’s own offspring (Stokke et al 2007). Additionally, if the host bird recognizes that there is a parasitic egg in its nest and tries to remove it, the parasitic bird may return and destroy the nest to deter this behavior in the future. Furthermore, the alien egg is typically the first egg to hatch, causing the host bird to not notice the alien chick’s unusual appearance compared to its own chicks. This may result in there not being enough food for the host chicks to survive, since the parasitic hatchling grows much bigger than the host bird’s offspring and essentially takes over the nest (Sanders 2004).  In this way, the act of brood parasitism threatens the biodiversity of the host bird species because less of the host bird offspring survive to reproduce (Wagner et al.). Furthermore, some species of parasitic birds have developed a beneficial ability, known as mimicry, to produce an egg that resemble the eggs of other species in order to increase the chance that the other species will raise the parasitic egg without suspicion. For example, there are seven different types of female cuckoos that lay eggs with different patterns that resemble those of different species (Soler et al. 2003). This process of evolving various adaptations and counter-adaptations is called coevolution. Ultimately, brood parasitism increases the fitness of the parasite birds, allowing them to successfully reproduce and survive, and will therefore continue to be an observed trait in certain species of birds. 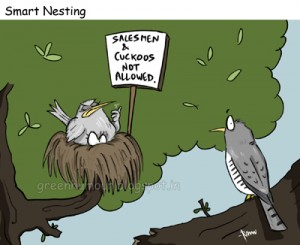 Figure 3: A cartoon of a bird displaying a sign that says “Salesman &Cuckoos Not Allowed”. Available from: http://www.greenhumour.com/2010/10/smart-nesting.html

What are GWAS (genome-wide association studies), and how can they fight common human disease?