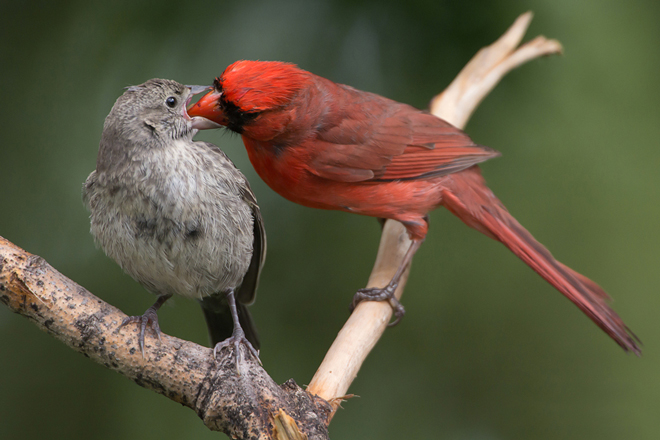 Are you my mother? Why some birds lay their eggs in other birds’ nests.

There are over 9000 species of birds, each with their own distinct colour, sound, shape, and size. Birds can be seen as colorful, beautiful creatures but when birds are studied closely, they can also be seen as manipulating and cunning.

What are Avian Brood Parasites?

Avian brood parasites are birds that tend to lay their eggs in other host bird’s nest, causing the host birds to raise their fledglings. If a particular bird within its population is considered the most fit then it will have the greatest reproductive success and therefore be most likely to pass along its alleles to the next generation. This is the basis of natural selection, one of the four mechanisms of evolution. Some of the more common species of avian brood parasites are Cuckoo birds and cowbirds (Fulmer and Hauber 2015). There are a number of hypotheses as to why brood parasites choose to abandon their young, and researchers postulate this behaviour to range from unusual reproductive techniques to mothers who simply do not want to raise their children. (Fulmer and Hauber 2015)  Having another bird raise their offspring allows them to increase their overall fitness by putting more energy into reproducing rather than rearing their young. A cowbird or cuckoo will typically lay its eggs in order to maximize its number of offspring. Although the strategy does not always work, the birds put in a good effort to ensure the survival of their offspring.

Host selection can be non-discriminatory, which is no parameter checks, or discriminatory parameters such as host egg size in nest selection (Fiorini et al. 2014). It can also be facultative conspecific which is choosing a host within the same species, or obligate interspecific which is purposely choosing hosts outside their species to raise their young (Fulmer and Hauber, 2015).

Scientists have also tested theories on why a cowbird chooses the hosts they do, and results concluded that age plays a role in the cowbirds decision. A cowbird chooses their host based on the age and experience the prospective host has (Moskat, 2014). A young prospect will be unlikely to accept another egg due to lack of parental experience, whereas an older parent will be more accepting on raising an extra baby due to the confidence and experience the older bird will have.

Egg mimicry is another important technique (Kruger 2007). This makes it harder for the host to distinguish between their eggs and the parasitic eggs. However, if a host is able to detect a parasitic egg they usually try to remove it from their nest. Host birds also may leave their entire nest if they find that it is parasitized. This then affects the parasite’s reproductive success and also sometimes the host’s reproductive success.Cowbirds and cuckoos have also evolved to produce thicker egg shells to reduce the chance of the host parent pecking through it. The parasitic birds have advanced to have smaller overall egg size and similar patterns to those of their host species.

Another reason why birds lay their eggs in other bird’s nests is due to the unfortunate circumstances of siblicide within a bird’s offspring. Siblicide is when fledglings will kill their siblings, and researchers believe that this is due to the conflict between parent and offspring, and what they believe to be the optimal clutch size. Hauber and Fulmer explain that some parents may benefit from a larger number of offspring, but the fledglings benefit from having less siblings so they won’t have to compete with one another in order to gain the parent’s main focus (2015). It is proposed that due to this unfortunate event between siblings, certain species of birds may adapt brood parasitism in order to prevent offspring from competing with close relatives.

Brood Parasites invade other bird’s nest because they don’t want to take up the energy and the costs of being a parent. Even though they want to increase their fitness, they still produce eggs, but instead of raising their own eggs, they place them in other bird’s nest. This becomes a problem for hosts. Since these parasitic birds don’t need to take care of their own chicks, they can they go on and continue to reproduce again, increasing their reproductive rate. Research continues on parasitic birds because of their odd behaviour as scientists aim to uncover the logic behind their reproductive strategy.

Do telomeres have anything to do with aging and getting sick?