Our DNA Makes The World Go Round [Internet]. UNSW Australia; School of Biotechnology and Biomolecular Sciences. Available from: https://www.babs.unsw.edu.au/.

Do we owe our existence to a single mutation in a single celled organism?

In the course of evolution, single celled organisms were forced to mutate in one or the other way. One of the many ways being natural selection, due to environmental adaptations, ecological race for survival of the fittest and predation,single celled organisms were being more modern. The other reason for mutations was increase in the oxygen level of atmosphere which caused an increase in DNA complexity.Due to this complexity ,cells were able to undergo meiosis and mitosis division which further was responsible of mutations in cells.

Multicellular life is thought to have evolved on several separate occassions during the history of the Earth and still unclear whether it would have taken the same path on each occasion. However, the latest discovery builds on previous work by Dr. Ratcliff that showed the single celled yeast called Saccharomyces cerevisiae, which is used to make beer, can be coaxed into forming multicellular ‘snowflakes’ by selecting those cells that settle fastest in a culture. 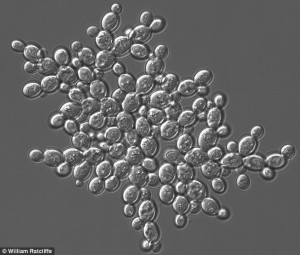 (By altering a single gene called ACE2 in the brewer’s yeast Saccharomyces cerevisiae, researchers found the normally single celled organism began growing in clusters, as shown in the microscope image above, that over time showed evolution as a multicellular organism).

Mutation not only created our ancestors, but also permeates and shapes our lives at every turn. It decides our skin color, the diseases we get etc. The evolution and reproduction of human can’t leave mutation. Another fact about mutation is people’s behaviors or habits can accelerate mutation and increase or decrease the chance of getting disease. In the article “Somatic Mutation, Genome Mosaicism,Cancer and Aging” by Jan Vijg, the author provides a great example. She says “tobacco smoke which, increases cancer risk in a clear dose-response have an average mutation frequency more than 10-fold higher than lung tumors from non-smokers”.  Mutation affects us all the time.

Single celled organisms were primarily swimming in the sea is what was called as life in the past. But at some point, cells started coming together to create entities with two, ten and eventually millions, of cells. The first requirement for multicellularity to emerge is that all the cells must contain the same genetic information. Wolpert and Szathmary stated that,” The first step in development of complex organisms the establishment of a pattern of cells with different states that can differentiate along different pathways. Patterning process requires signalling between and within cells, leading ultimately to gene activation or inactivation. Such a process lead can to reliable patterns of cell activities only if all the cells have same set of genes and obey the same rules” [2].  Without the same genetic blueprint to work from, there is no gurantee that cells will be able to communicate properly so as to coordinate their action. The cell who has similar genetic information as other cells, may come together to form a colonial structure.

The most ancestral organisms, choanoflagelletes had formed colonies which futher divided more to form multicellular organisms.The image shows, A fluorescence micrograph of a dividing choanoflagellate showing its DNA (blue) and flagella and mitotic spindle (green).Bottom: A small choanoflagellate colony with one of its cells dividing. (Credit: University of oregon)

While each choanoflagellate is unicellular, they’ll often organize into groups to form a multi-celled colony to feed on certainfoods. Multiple cells working together to accomplish a singular task is basically how our organs work today. Therefore, the researchers theorized that there had to be a genetic change somewhere along the way that let solo cells recognize each other and come together. 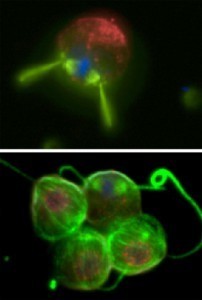 Does telomere length have anything to do with getting old and sick?