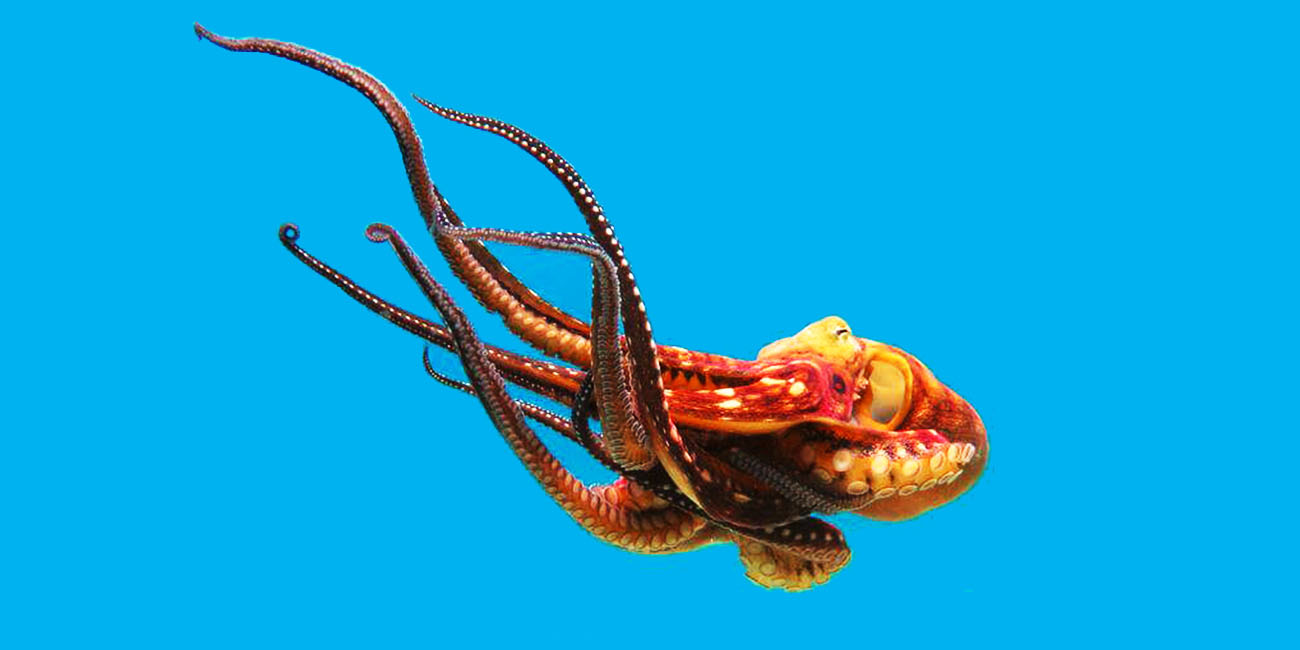 Intelligence has mainly been studied using vertebrates, but are invertebrates, in particular cephalopods, potentially smarter than 5th graders? With the largest nervous systems among invertebrates, octopi perform intellectual behaviors including complex problem solving, observational learning and play (Albertin et al. 2015). Even though octopi and humans do not have many things in common, learning about octopi can expose us to the idea of intelligence in a broader fashion.

The nearly half a billion neurons of an octopus contribute to their complex nervous system (Albertin et al. 2015). The main brain of a large octopus is comprised of 64 lobes, and axial nerve cords run down the center of each arm to carry information to and from this massive brain (Kalupa 2012). Having hundreds of suckers on all eight arms, each with their own ganglia, allow for very accurate touch and taste sensations (Albertin et al. 2015).

Anderson and Mather (2002) explain that the octopus’s brain has vertical and sub-frontal lobes dedicated just to storing learned information. This built in intelligence allows them to learn visual patterns, mostly by comparing shapes. The extent of an octopus’ ability to learn and remember has been tested through experimentation. For example, Anderson and Mather (2002) found that in one trial octopi were offered a variety of clams and remembered specific types. They developed unique techniques to open each type of clam depending on the shell type, and were capable of remembering these techniques.

Humans are known for their imaginative minds and ability to create art with their hands. The equivalence of human’s hands are the tentacles of an octopi. The octopus utilizes them as a form of pincer too; they use the pincers on their tentacles to grasp objects such as food. Because octopi also contain a brain in every tentacle, it’s easy to understand the complexity in every precise movement, highly comparable to that of a human’s creative mind. Having eight arms, all of which are capable of folding and collapsing to squeeze through tight spaces, as well as unanimously thinking independently, octopi are more advanced.

These pincers and their eight arms are excellent equipment for exploration (Mather 2008). Independent exploration begins early as young octopi spend their early months drifting through all sorts of different environments with no influences from parental care (Kalupa 2012).  Being independent and dealing with these variable environments, demonstrate an octopus’s “take” on intelligence (Anderson and Mather, 2002). Octopi have many defense mechanisms to survive on their own, including spraying a dark cloud of ink at the predator and changing colors to blend into their surroundings (OctopusWorlds, 2014). In a situation where a ten year old is threatened or being attacked, chances are they would run away not being able to defend themselves; however, an octopus would have no choice but to stand up to the predator. Being able to think quickly and attack their predator, shows a higher level of intelligence that a 5th grader is not capable of.

While octopi are incredibly logical and problem orientated, they are also very curious. Given the opportunity, octopi in captivity will dismember anything man-made. They are also masters at escaping confinement, as they have proved to be one of the most difficult animals to keep in captivity due to their inclination to escape any tank. However, much like children, octopi engage in play. In captivity, they are observed playing with bubbles or any objects in their tank, including throwing objects, and shooting jets of water. This tendency to play coupled with individuals preference towards certain games or activities, leads to the belief that every individual develops a unique personality due to their individual reactions to stimulus (Mather 2008).  Some are shy and barely come out from hiding, and others are extremely aggressive and try to even pull humans down into their tank when in captivity (Kapula 2012).

Octopi face an enormous pressure for cognitive development due to living in a strenuous and demanding environment (Mather et al. 2013). Octopus are now acknowledged to be the product of ocean demands, such as predation and a constantly changing habitat, making them intelligent invertebrates. They are capable of complex and flexible behaviour as a result of these demands. It is hard to compare an octopus’s intelligence directly with a 5th grader’s; however, through an octopus’s complex nervous system, ability to survive on their own and capability of creativity, they are proven to be smarter than a 5th grader.